How many days until Flare Network launch?

The Flare Network audit performed by Trail of Bits is complete and passed with no vulnerabilities. According to Trail of Bits: “The audit did not uncover any significant flaws or defects that could impact the confidentiality, integrity, or availability of a Flare node or the network at large.”

With this milestone, Flare’s mainnet genesis will occur on or shortly after July 11th, 2022, subsequent to a final audit of the token distribution smart contract code taking place the week of July 4th.

At genesis, all initial token balances will be created. The Flare Foundation will hold all tokens that are attributable to all Flare-related entities and team. These tokens will be distributed at the public token distribution event (see below). The only token transactions during this time will be made for operational purposes, including funding and delegating to FTSOs and for system testing purposes. Each Flare address will be published.

Upon exiting observation mode, the initial token distribution of 15% will take place. It is at this point that self-custody token recipients will be able to access and use their tokens and that exchanges can distribute the tokens to their users.

The remaining distribution will start subsequent to a governance vote, mentioned as FL02 in the Flare rollout details below, on how to conduct the distribution. The governance proposal will be published on or before mainnet genesis. The vote will take place on Flare at the earlier event where at least 75% of the initial distribution is capable of voting or 6 months from the public token distribution have elapsed. In the case where tokens have gone to exchanges, this means that the exchanges will have distributed the token and made it possible for users to withdraw them.

Inflation will commence after observation mode completion and will be set to 10% per annum calculated monthly on the total unlocked supply. The governance vote will then dictate future inflation.

The following roadmap outlines the anticipated order of events on Flare. 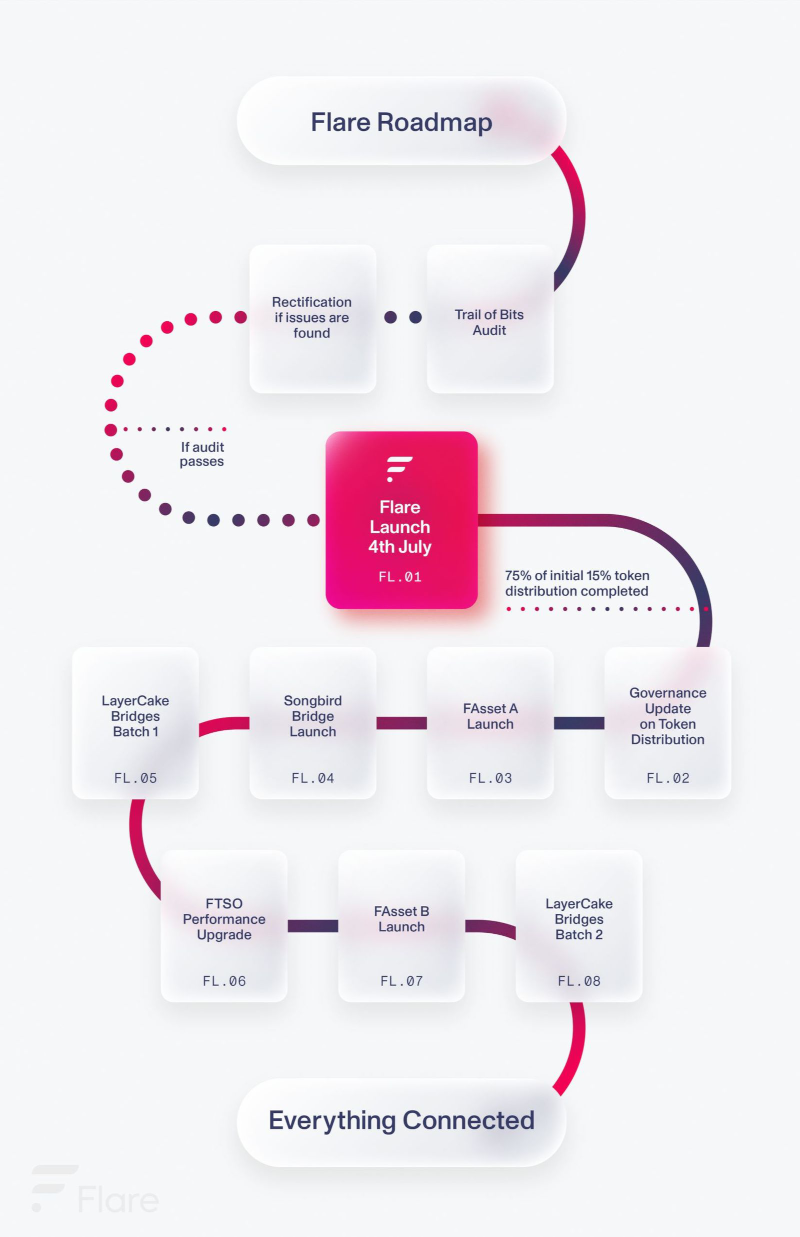 FL.01 Flare Launch: Main network launch and distribution of the initial 15% of tokens.

FL.02 Governance Update On Token Distribution: The team has been working on a governance proposal regarding the token distribution. The proposal intends to achieve three things:

The governance vote for this proposal will only take place once 75% of the initial 15% distribution is freely available to take part in the governance vote. In the case of exchanges, this means that the token will have been distributed and can be withdrawn from the exchange. The proposal details will be published with ample advance warning before Flare launches.

FL.04 Songbird Bridge Launch: This will allow all Songbird tokens to be bridged to Flare and vice versa.

FL.07 FAsset B Launch: This version of the FAsset system uses a 2.5X collateral ratio on Flare, but allows the agent to hold less than 100% of the tokens on the underlying chain

The team at Flare recently held their first “Community Call” where they presented a complete overview of the network and what they aim to achieve with it’s launch.

It’s a really informative call, you can watch the full replay here.