~ Flare’s State Connector is the solution to secure universal interoperability.

~ It enables smart contracts on Flare to read the state of any open system, blockchain or otherwise - in a secure and decentralized manner.

~ Connects to both on-chain and off-chain data sources – bringing a new era of utility for dApps.

~ Seamless deployment with no amendments or integrations required on the connected blockchain or data source.

~ The State Connector is a core protocol required for the delivery of FAssets, which will bring non-contract tokens such as BTC, DOGE, and XRP onto Flare so they can use EVM-based smart contracts and access the decentralized economy.

~ Sets the foundations for a trustless and secure universal bridge to be built on Flare.

~ Allows for safe relay of information between all chains connected to Flare, leading to true cross-chain dApp interoperability and composability.

Flare’s State Connector is an exciting new technical solution for secure universal interoperability, an issue that has long frustrated the entire blockchain industry.

It is a new core Web3 protocol that allows the state of any open system, whether blockchain or non-blockchain, to be proven on Flare and used with smart contracts or relayed to another chain in a trustless, decentralized manner. It’s faster and safer than any existing solution, such as light client relays with simple payment verification proofs - and it achieves this while maintaining the security of a full node.

The State Connector has been designed to integrate with any other blockchain, no matter their Sybil resistance technique, making it possible for developers to build dApps that can access the value and liquidity of multiple chains with a single deployment. This also opens the door to a truly trustless universal bridge built on Flare. According to DeFi Llama, $21.8B of crypto assets were locked in bridges as of March 2022, and this is expected to grow dramatically as more secure interoperability technology is developed - such as the State Connector.

Other solutions either require trust in centralized third parties, or they force other chains to conform to their standards - in effect changing the independent chain’s protocol and code so they can communicate. By contrast, the State Connector can directly validate state correctness and withstand safety and liveness attacks on connected L1s, all without requiring a centralized third party or even a code change on the connected chain. 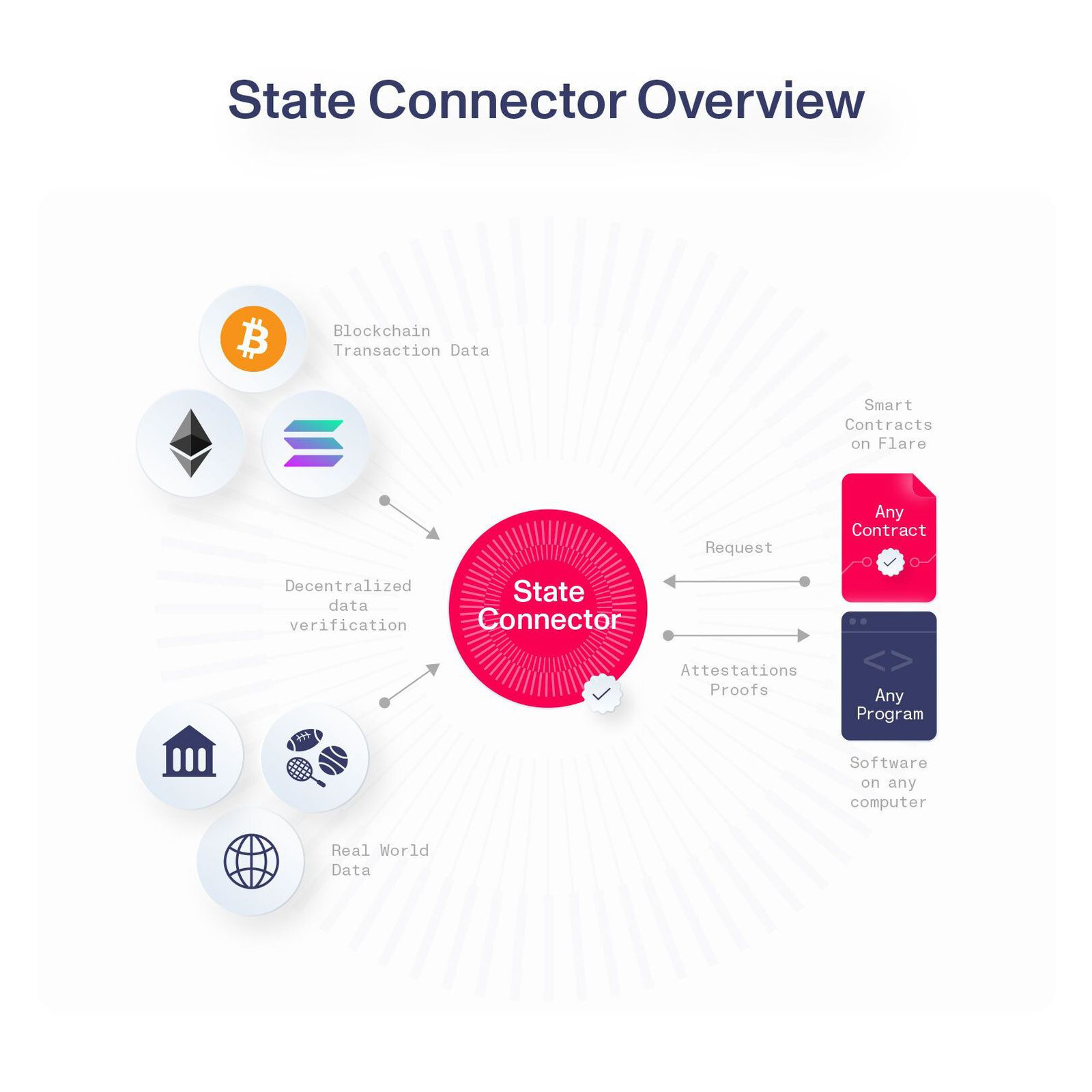 Cross-chain interoperability: Communication between two or more disparate blockchain ecosystems that are technologically incompatible due to the lack of shared systems, protocols or code (e.g. Ethereum and Solana). Also known as inter-ecosystem interoperability.

Light client relay: A simplified blockchain node construction built for speed that only queries the header data of any transaction and therefore lacks the security that comes from querying a full node with full history.

Oracle: An entity that connects a blockchain with external systems, providing data on their state.

Attestation: A data proof provided to the State Connector by Attestation Providers that confirms the validity or otherwise of any request.

Cross-chain interoperability is predominantly handled by the former. These are moderate to highly centralized systems which are more susceptible to attack and offer little recourse to users in the event of failure. February’s Wormhole attack is just one of many recent examples demonstrating why it is necessary to achieve decentralized interoperability in order to keep assets secure. These bridges also face regulatory risk, are censorable, and introducing a critical centralized element into any blockchain process often defeats the objective of building on the blockchain in the first place.

Recent developments in cross-chain interoperability have often implemented Light Client Relays. Although they don’t theoretically suffer from the same issue of centralization (but often do in practice), their on-chain implementation is complex, which causes them to operate quite slowly and with an inadequate approximation of a full node’s security, making them more vulnerable to attack. They’re also incompatible with certain types of networks and pre-compiled contracts, meaning they do not create true, universal interoperability.

Vitalik Buterin recently proclaimed that the future will be multi-chain not cross-chain due to an anti-network effect. This means that the more cross-chain activity there is, the greater the risks for all participants. This is likely due to his valid concerns about the robustness and security of Light Client Relays and custodial solutions. 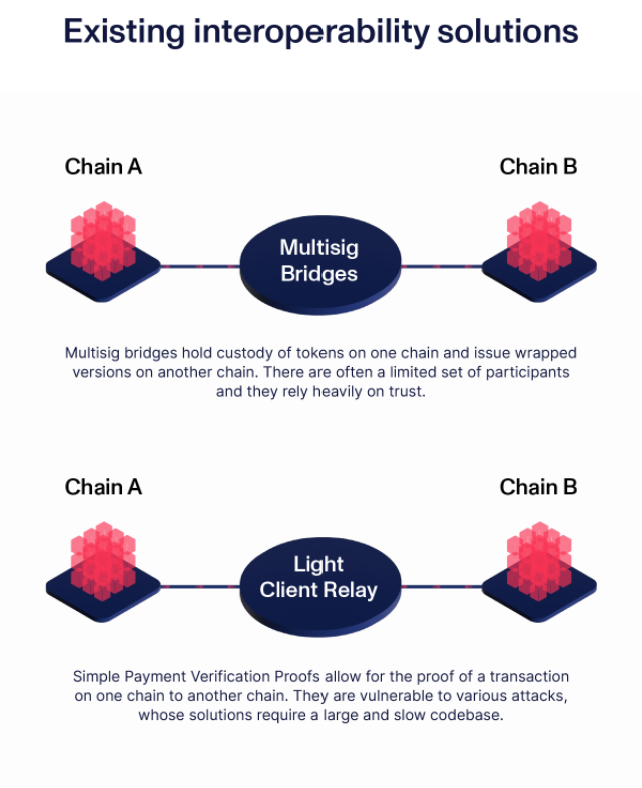 Since inception, Flare has had an uncompromising focus on achieving secure, scalable, decentralized cross-chain functionality through the development of superior technological solutions - in order to help address issues slowing the progression and adoption of blockchain.

Flare’s ambition is to connect the decentralized economy. By providing cross-chain interoperability with the speed and security of multi-chain, Flare will mobilize value between ecosystems, unleashing the full power of Web3 and a tidal wave of liquidity. Developers will be empowered to build blockchain applications with real utility, and bring game changing, disruptive business models on chain.

The first step is to scale the use of blockchain by enabling all digital assets to flow freely, and in the process demonstrate the future can indeed be cross-chain.

Cross-chain with the security of multi-chain

The State Connector is a native open protocol on the Flare Network, providing application builders with a secure building block for cross-chain interoperability. It is a new and foundational technology that makes it possible to create secure universal interoperability between any two chains, whether one, both or neither have smart-contract functionality:

~ Bringing non-contract tokens such as BTC, DOGE, XRP onto Flare so they can use EVM-based smart contracts

~ Bridging between any two smart contract chains with multichain safety

~ Use of non-contract tokens on any other smart contract chain

~ Safe relay of information between all chains, enabling cross-chain dApp interoperability and composability

The State Connector is much more secure than previous interoperability mechanisms because it is able to fully query the validity of a transaction, including its history. Other approaches like Simplified Payment Verification proofs are unable to do this, and so the “proof” has no detailed history to support its validity. This means that the State Connector is also able to mitigate the risk of reorg attacks on connected chains - enabling cross-chain interoperability with the security of a multi-chain network.

The first interoperability application to be built on the Flare network will be FAssets which addresses the first of the three bullets above. According to CoinGecko, as of 25/03/2022 only $0.70T of the total $2.09T value of crypto tokens can currently run smart contracts. This means that two thirds of the current total value of blockchain is locked out from participating in the decentralized economy. By minting non-contract tokens into FAssets on Flare, new utility is brought to these chains. No longer are they simply an investment asset - now they can be put to work earning yield or rewards in decentralized applications on the Flare network. There is a DeFi party on Flare and everyone is invited.

The second interoperability use case between different types of chain will be solved by different applications. In fact we have recently proposed a novel bridging system to do just this. These applications could be built by Flare or by any aspiring developer using Flare’s technology.

Information relay between chains uses the State Connector to prove the required event (from another blockchain or from a database) onto Flare, and then a decentralized system of relayers propagates the signed proof of this event to any other chain. The relayers are then rewarded when the State Connector observes that they have put the correct data on the other chains. Importantly, dApps can rely on this data because they can observe and check that it has been signed by State Connector participants. This allows dApps on those chains to use information from any other chain or database that is connected to Flare, including the FTSO data. A first example will demonstrate the propagation of FTSO data to Solana.

A grants program and a set of native rewards will be announced in the near future to incentivize developers to build out FAsset, smart contract bridge and relay systems across as many chains as possible. For an alert when the grants program is live, please sign up for Flare email updates, or join the official Discord or Telegram channels. 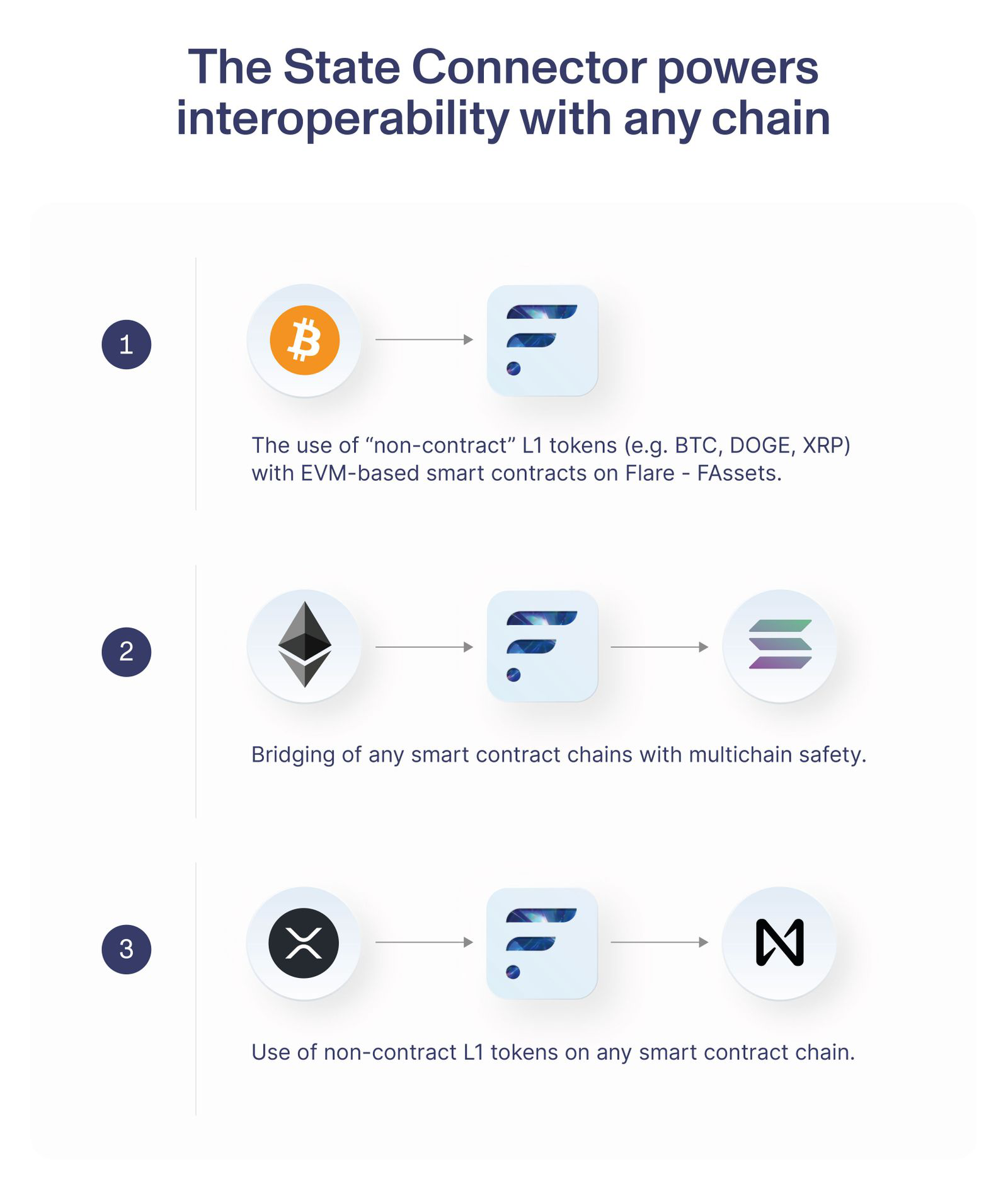 Trustlessly read the state of any real world event

One reason for limited real world utility on blockchain is the difficulty in trustlessly bringing off-chain or real world event data on chain - which can mean that Web2 solutions remain more functional and newly envisaged business models haven’t been feasible to implement … yet. Known as the “Oracle Problem”, blockchain applications that require external data to operate have previously needed to obtain this data from centralized sources, which creates an increased security risk.

In addition to being able to trustlessly read the state of transactions on any blockchain, the State Connector can also trustlessly read the state of any deterministic real world data source and prove the outcome to any contract on Flare. This avoids the risks associated with current centralized models, and opens up incredible opportunities for new utility and business models.

No amendments or integrations are required on the blockchain or data source being queried. For new chains or data sources to be integrated, all that needs to happen is the development of a new API. This is a Flare-side update so doesn’t affect the queried blockchain’s codebase.

Initially it will be a governance vote to enable new State Connector data sources. The expectation is that the focus will be on integrating additional blockchains - and again, grants will be available for developers wishing to support Flare. In the future it will be possible for people to deploy their own new data sources as easily as it is to deploy a contract today.

When an application on Flare requests a proof of a blockchain transaction or a real world event, the State Connector emits this request to a decentralized group of Attestation Providers (APs). The APs are a separate group to the FTSO data providers and validators.

Anyone may operate as an AP without any capital requirement. The security assumption is that if an independent attestation provider is correctly attesting the requested state, then they will always be able to diverge from an incorrect default relayed state and end up on the correct branch of the Flare state. A detailed explanation of how this process works is available in our recent white paper, and a simplified version will be provided in a separate article accompanying the launch of the State Connector. More detail is also available on the Flare Technical Documentation pages.

With the power of the State Connector added to the Flare Time Series Oracle, Flare has created a set of native open protocols which provide secure building blocks for next generation interoperability. Flare enables cross-chain interoperability with the security of multi-chain - faster, universal and more secure. Flare will Connect Everything.